These are some of the achievements of Triumph Uganda since 2013.

Robinah Alambuya, World Network of Users and Survivors of Psychiatry (WNUSP) by then Chairperson Pan African Network of People with Psychosocial Disabilities, addresses the round table discussion on “International and regional cooperation and partnerships for disability-inclusive development”, held as part of the General Assembly’s high-level meeting on disability and development. On her right is her husband Pr. Billy Melchizedek Alambuya in attendance too. She is also a founding director of a grass root local organization Triumph Uganda mental health support and recovery program.

Triumph Uganda ,under the first name of Christian Family initiatives in mental health at the grassroots sent out its member Robinah Alambuya to work with Mental Health Uganda a National organization. She shrived  to become a continental leader; as Chairperson at that time and  currently secretary of the Pan African Network of people with Psychosocial disabilities. She  represents their legitimate voice at different forums, including WHO where she received  a Swiss award 2013 for “Outstanding contribution to mental health and the Vulnerable people in society”.

TRIUMPH conducted training on introducing mental health to communities. This pilot training program targeted selected members of TRIUMPH. The training was done using World Health Organization (WHO) Community Training Manual for mental health. As one of the training outcomes, one of the trainees was able to take appropriate action which resulted into saving a person with mental illness from mob justice. This has resulted into good working relationship between the TRIUMPH and the Uganda Police Force. The Police force in the TRIUMPH catchment area is more sensitive and involves TRIUMPH in some of the cases they come across concerning people with mental health challenges.

Triumph uganda member was previlaged to be on the National Union of Disabled People of Uganda(NUDIPU) that interfaced with the United Nations CRPD committee in Geneva,2015-2016 to present the Altenative report  in response to the Uganda government official report on disability.

Triumph Uganda in 2015 initiated an Awakening Campaign,” YOU AND YOUR BRAIN – The brain our responsibility” and worked with Deliverance Church Uganda leaders, Uganda Mental health Fellowship, Youth with a Mission, Gilead and Go pharmacy, the campaign was the First of its Kind which was embraced by the District Leaders and graced by the presence of Dr. Sheila and Dr. Hasfa from Ministry of Health.

Triumph members participated in the 2016 Tear Fund Ugandan Gathering International Meeting where they shared experiences and based practice in Community service delivery.
This year 2016 Triumph contributed to release some of its members as leaders in a new National Advocacy Organization for people with Psychosocial disabilities called MY STORY INITIATIVE .Triumph believe in bringing people in (building them up, and sending them out to serve other communities). 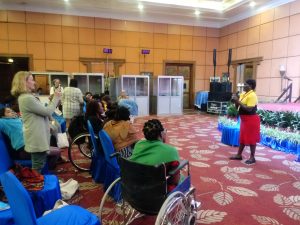